Home / News / Important Items You Should Be Recycling

Important Items You Should Be Recycling

50 years ago, we didn’t recycle or reuse most items, apart from perhaps milk bottles. As our awareness of the damage we are doing to the environment has changed, we are more ready, willing and able to recycle pretty much anything. If you look around your house, there isn’t much that can’t be reused or refashioned, so here is at look at those important items you should be recycling.

It goes without saying that in 2017 most people should be recycling more items in their kitchen than ever before. Think before you throw items into your main rubbish bin as most bottles, cans, cardboard & plastic food packaging and newspapers can be placed in your recycling bin or box, and collected by your binman. Every six months it’s a great idea to have a look through your kitchen cupboards or pantry and have a look at items like tinned fruit, tinned rice pudding, pasta sauces, pasta and consider donating anything you’re clearly not going to use to you local foodbank. There’s no need to throw it in the bin and let it be consigned to landfill for the next century – get it out of your house and into the hands of someone that could really benefit from it.

Clothing can also be recycled (unless it’s in a really terrible condition!). Charity bags through your door are a great motivator to have a rummage through your wardrobe and fill a bag, but don’t feel like you just have to just stop there. Some companies are now buying clothes, so there’s a chance to make a little money rather than just throwing items away. High street clothes shops have also started offering vouchers against donating a bag of clothing. You could always fill up bags and leave them in your car boot, just in case you see a good offer. Shoes too can be donated, which can be donated to homeless people across the UK or those hit by famine or weather-related disasters such as hurricanes or earthquakes. Have a look online and find the nearest drop-off point to you.

While charity shops will take a lot of household items, you can also make a small profit by selling these items online – books, CD’s, DVDs and even Lego can be cleaned up and sold by companies online – they will happily pay you a token amount to take them off your hands. It’s a great way of clearing space at home and no need to throw them out anymore. You can scan or enter the bar codes of books, CD’s and DVDs which will give you an instant price which you can either accept or decline. Then pack them up and drop them off at a collection point near to you. Electrical items such as fridges can be hard to dispose of, but most councils will pick them up from you for a small fee – have a look on your local council’s website for their kerbside collection service. Charity shops will also take these items, refurbish them and sell them on – and items like fridges are always extremely popular as they’re often hard to find at a competitive price. You can take them to your local waste and recycling centre, most of them have an area that you can leave items that you think could be reused – there is no need to throw them into the general waste area.

You don’t have to stop there – computers, phones and batteries can all be recycled too. Supermarkets often have special recycling bins for selective items. Make sure you remove any important data from a computer and contact one of the many non-profit groups that will collect this kind of equipment for re-use . There are thousands of old PC’s kicking around from the start of this century as people move over to laptops and tablets – don’t throw them in the bin as they can emit harmful toxins and lead into the soil. Get them to a company that will reuse what parts they can instead and help do your bit to save the planet.

If you have any questions and would like advice about recycling for your home or business, please feel free to contact Dial ‘a’ Bin. 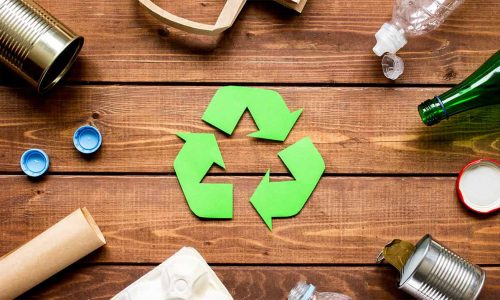